Gol D. Roger is said to be a pirate king because he made it to the last island and also succeeded in visiting all the islands. But, unfortunately, Roger then had to be executed by the navy because he felt all his adventures had been completed. Information about Roger himself is still very little, even though hundreds of chapters have been passed.

This also applies to Kaido, who is one of the Yonko alias rulers of the sea. Kaido was once a subordinate of the legendary pirate, Rocks D. Xebec, whose name must be removed from history because of his cruelty. Being a Xebec pirate crew is certainly not an arbitrary matter, because only the strongest people can do it. Kaido is one of them, but with his current position as the ruler of the sea, who will win if Kaido fights Roger? 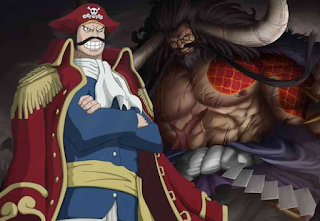 As mentioned above, it is not just anyone to be a Pirate Rocks man. The true power of Kaido himself has not been revealed yet, obviously because during his fight against Luffy, Law, and some of the Worst Generations the power he used didn’t even reach 50%. Gear 4 Luffy also seems to have no effect on Kaido, who is known to have a strong body.

Roger is the same. In addition to physical strength, the Haki he has is also very extraordinary. An example is at the end of chapter 955 yesterday where all animals felt scared. If you fight physically, it feels like Roger will lose to Kaido. Moreover, Roger is smaller than Kaido who looks like a monster. Kaido also has a technique to harden his body, which is certainly very difficult for Roger to penetrate. 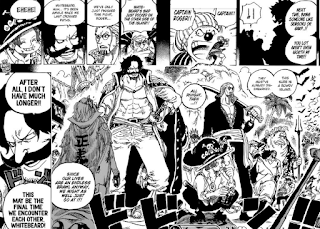 Both Roger and Kaido, in fact both have a great army. But, for his own number, the pirate Roger was far behind Kaido. Although it is not yet known exactly how many crews from Roger, but the total crew is likely only around 20-30 people. Roger himself did not have troops or other divisions, like Whitebeard.

On the other hand, Kaido has many divisions and troops. Speaking of numbers, Kaido’s forces numbered more than 10,000 troops. Rayleigh and the other Roger crews might be very strong, but if you had to face 10,000 troops at once (before finally fighting Kaido) it would be very unlikely. Not to mention Kaido also has a strong division commander like his three mainstay Jack, Queen, King. 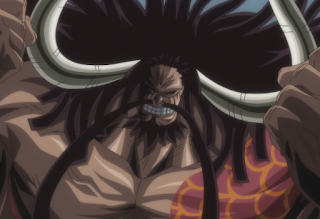 When it comes to physical battles, maybe Kaido won the point. With its large size, of course the energy expended was not kidding. But, when it comes to Haki’s strength, Roger has a chance to win at this point. Kaido himself actually mastered one of the Haki, the Armament Haki which made him a human being that was hard to hurt.

But, geeks certainly remember the story about Enma’s sword. The sword became the only weapon that had ever injured Kaido’s body, and the wound was still visible. The sword was drained by Haki. Roger has the power of Haki is very powerful, where even animals on one island to fear near Roger. Even in chapter 966 it was shown that Roger succeeded in resisting Whitebeard’s attack, even though their swords had not touched. However, the energy produced is extraordinary.

A leader certainly requires charisma in order to get sympathetic from others, and especially from his men to be willing to follow orders. Kaido itself has tens of thousands of troops under its control, but it could be that they want to follow Kaido’s orders because they are under pressure and fear. Kaido was known to lead his army very firmly.

A different matter was shown by Roger, where almost all of his troops voluntarily agreed to follow Roger’s orders. In fact, they are willing to die to protect Roger. They also respect and care for the captain. The atmosphere built by Roger is more to a personal approach, where they laugh and be more happy than fear.

Kaido might become a pirate of high value, thanks to his adventures and also what he has done in the past and present. With its position as one of the Yonko, it is natural that then the value of hunting is given a large number by the government. Do not forget also how the destruction he had made, making the value even higher.

Kaido game value alone reaches 4 billion belly. But, it turns out that the value is still inferior to the hunted value of the pirate king Roger, whose value reaches lima billion belly. The figure is reasonable, because Roger arguably knows all the ins and outs of what is happening in this world thanks to all the information he knows from Poneglyph.

In fact, neither Roger nor Kaido had definite allies. But, as we know, Kaido collaborated with Orochi to overthrow power in Wano and turn Orochi into a ruler. Roger himself did not have a clear ally, but he established a

Real proof of Roger’s good relationship with Garp is when Roger entrusts his son to Garp, because Roger already considers Garp like a friend. Kaido himself only considered Orochi as a mere “business partner”, so it was not impossible if one day Kaido canceled their cooperation and destroyed Orochi’s troops.

In a battle, weapons are certainly needed to help win. This was realized by Kaido, where he built the SMILE devil fruit factory and also produced chemical weapons, as shown in the previous chapter where Luffy had to be exposed to artificial poisons from the Queen. Kaido was aware that weapons were needed to gain power and world domination.

Different things happen to Gol D. Roger, where weapons are not a special reason to win for him. In the discussion above, we already know that if physical battles might be Kaido would have an advantage over Roger. But, he has a “weapon” that is stronger than conventional weapons. Apart from the black sword he had, Roger did not have any weapons. Kaido himself has a hammer with a pointed end, which can destroy his enemy quickly.

Being one of the Yonko or the ruler of the sea is indeed not easy, because that reputation is certainly not obtained in a short time. Being a ruler of the ocean also needs great strength, because there will be many rivals coming. But, if you have to fight with a pirate king, of course there are several factors that are taken into account.

Based on the points mentioned above, Kaidou did have an advantage for several things, especially in terms of physical strength, weaponry, and troop numbers. But, when it comes to Haki or allies, Roger has the advantage. With that level of strength, Roger became one of the characters who could defeat Kaidou.