Although only appearing very little or briefly in the film, the popularity of Mandalorian is truly extraordinary. In fact, the popularity that later made Disney agreed to make The Mandalorians TV series that aired on the Disney Plus platform. Here are various things that happened with Mandalorians in the past. 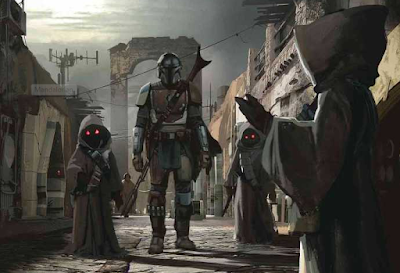 War of the Mandaloreans and the Cloning War

Planet Mandalore was briefly referenced in Star Wars Episode II: Attack of the Clones, although it is not known what the role of the planet Mandalore was in the conflict. However, in the series The Clone Wars , Mandalore was shown to have an important role in the war, which later became known as the Mandalore War (Siege of Mandalore).

This happened even though the Mandalorians did not side with either side and tried to stay on the neutral path. Darth Maul went to the planet Mandalore and then took over the leadership of a group called Death Watch, which was a class against all matters relating to mandalorians.

In the midst of the war came the famous Order 66, and as a result, everything turned into chaos. Ahsoka and Maul managed to escape, the Republic – which later turned into an Empire – destroyed control of the planet Mandalore.

The Arrival of the Imperial Nation and the Remaining Clans

After being taken over, Empire later established the Imperial Academy on the planet Mandalore in order to build and train new Mandalorian troops, including Sabine Wren who appeared in the Star Wars: Rebels story. Sabine then secretly made a very powerful weapon, increasing the tension between the Mandaloreans and the Empire.

Some clans in Mandalore were exhausted by the domination of the Empire on their planet, and then rose to fight against the Empire. This fact resulted in the civil war of the Mandalorean people themselves. Bad for Mandalore but good for the Empire, because the civil war made it easier for the

Empire to control Mandalore and its entire clan.

Some clans had to be exhausted and die from the war, but others were able to survive. Unfortunately, even though some of them survived and survived after the war they still had to be under the leadership of the Empire, and never regained their legendary reputation.

The level of destruction caused by the cloning war on the planet Mandalore, which resulted in many Mandalorians to be lost, is inevitable. That made the Mandalorean nation a dying nation, with only a small population or race.

In the initial episode of the series, a new event, the Great Purge, was added to the Star Wars canon story. This is an indication that the relationship between the Empire and the Mandalorian has deteriorated over time. Most of the clans on the planet Mandalore have been used up, forcing some other Mandalorians to flee and hide on other planets.

For this reason, most people in the galaxy believe that the Mandalorians have been killed, killed and slaughtered by the Empire. This could explain the comment from Burg in episode 6 about the Mandalorians who were considered dead. But, of course that is not true.

As we know in episode 3, after completing his mission for the Client in Nevarro and returning Baby Yoda to the Empire, Dyn Jarren then brought a gift given to him to give to a group called the Tribe. The group contains people (Mandalorians) who survived the Great Purge incident.

The Tribe deliberately makes strict rules for its members, and try hard to make the class remain under the radar alias is unknown to anyone. However, the secrecy was under threat when they united to assist Mando in dealing with other bounty hunters.

They must now look for a new hiding place on another planet. The second season of The Mandalorian is currently being produced, it is possible that more information about the history of the Mandalorian that has not been revealed can be displayed in the Star Wars canon story.